For today’s interview I got the chance to speak to upcoming singer/songwriter, Celestia. Currently based in Oregon, the Cali native has been working for the last two years to make a name for herself in the alternative / indie scene with hits such as “Sucky Notes” and her latest single “Malevolent” – it’s safe to say she’s in a lane of her own. If you enjoy listening to artists such as Avril Lavigne, TRACE, Miriam Bryant or any dark pop / indie rock artist that pops into your mind, be sure to listen to Celestia once you finish up the interview!

Q: Before we begin, would you like to introduce yourself? (Your name, Where you’re from, etc.)

Q: Growing up, did you aspire to be a musician or was it a dream that grew over time? Was music something you were brought up around?

A: Growing up I’ve always wanted to become a musician. A huge influence for the start of my interest in music comes from my family. The earliest age I could remember myself singing is around 5 years old. I’ve heard my mom sing so much when I was a kid that I wanted to try it on my own one day. She used to show me old videos of her performing when she was younger. My dad played the guitar, and eventually around 12-13 years old I started to teach myself how to play. I stopped music for a little bit in high school, but began to pick it up back up again in the more recent years.

Q: When you initially decided to become a musician, did you have support from your inner circle? (family or friends)

A: A lot of my friends and family already knew that I had a passion for singing, and for  music in general. In terms of sharing about how I could use my passion as my career was another story… I grew up in a very strict household and was taught that my only way in life was to graduate from college pursuing a job in the medical field specifically. I didn’t disagree with the way my parents made it important to go the traditional route, although having that principle in my life just made it hard for my parents to support me, sometimes even with friends. So I always doubted myself and decided to even stop music for a few years because of the discouragement. But I think I can confidently say now, I’ve learned from those experiences, I just keep trying, because it music makes me happier than anything else. 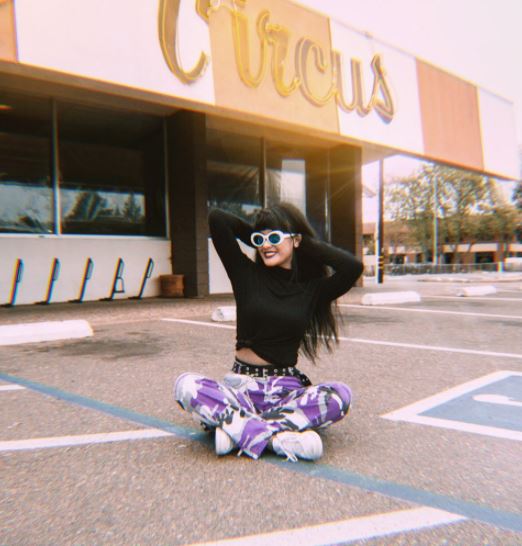 Q: Your music is generally alternative, who are some artists that you’ve been influenced by?

A: I feel like I’m influenced by so many genres. I grew up listening to a lot of classic rock from my dad, and more of R&B stuff because of my mom. I think that’s where my type of music I try to create comes to play. It’s hard for me to stick to one, I tend to mix and match often because I think it’s fun. I’m very experimental, it could be a bad thing sometimes in my opinion lol

Q: The first song you ever released to the public was “Sucky Notes” back in 2016. What gave you the inspiration to write that song? Were you nervous about how it would be received by the public?

A: Sucky Notes was a perfect example of what I was going through during that time. Being heartbroken was a huge part of the reason why I took my music to the direction it went to. I took sadness and tried to give that comfort to feel good while listening to it too. You know, I’m not gonna go in TOO much detail about it, but I definitely was in a dark place in my life when I created that song. Also during that time, a lot of my friends were encouraging me to release original music, so I gave it a shot and said why not? It’s not my favorite song, but it’s definitely a memorable one.

I was nervous to release it because I hadn’t shown anybody my original songs. So it was a big step for me and my development. It almost felt liberating because I was letting out so much emotion in such a vulnerable time in my life.

I felt like it introduced me to a lot of many opportunities as well. My current music has definitely taken a different direction from heartbreak, though. But I still apply those types of themes in my music.

Q: Since it’s release, it has accumulated almost 20,000 plays on SoundCloud alone, how does it make you feel to know this many people support you?

A: It’s surreal. I question it everyday. Like, why? I’m just a girl making music on soundcloud in my room. Lol. I did not expect that many people to listen to any of my music to be honest. I started to release my music for fun. When I started noticing that people wanted more, I changed my sense of direction to a more serious path. My supporters are the reason why I try to work harder, without them I don’t know where I would be. They taught me that music was something I wanted to seriously pursue in life.

Q: You continued releasing music throughout 2017 and in 2018 released your debut project This is Revival.  Where does this work ethic come from?

A: When the end of 2017 came to play, I started thinking about ways to try to experiment even more with my music. I felt like a lot of people didn’t know who I was just yet, and I wanted to formally introduce myself as an artist.

I was only releasing singles, kind of teasing the idea, you know? Haha. Since my audience started gradually growing, I wanted to give back to them somehow. Kind of sending the message out that I’m staying. I want to keep that type of relationship with people that support me.

Q: Speaking of your newest project, what is the meaning behind the title? Can you briefly explain the project as a whole?

A: “This Is Revival” is my baby. I treated this project initially as an experiment, but the concept of the project itself inspires me a lot. I just sat down one day and asked myself if I was really letting people know how serious I am about music. So I pumped out over 17 songs in a few months and said, ‘you know what, whatever, here it is. This is me. Take it or leave it.’ It started getting fun..

The more I made music, the more I learned how much I genuinely enjoyed it. Granted, I don’t think I’ve reached my entire potential yet, and I have those discouraging moments. But making music is truly and has always been a safe place for my creative senses.

Q: Since it’s release, you’ve released your latest song “Malevolent” – can you explain what the song is about for those who have yet to hear it?

A: Malevolent was a really fun project to work on. It’s about evil intent. Not necessarily about anyone specific, but the concept of feeling surrounded by hostile behavior. I don’t know. I can’t trust anyone. Just the truth. But it could mean anything to anybody, which is always the cool part about art. It’s also a single off of an upcoming project with one of my producers. M-Piece.

Q: As mentioned earlier, you’ve been out for almost two years – is there any advice would you give aspiring artists when it comes to creating music and staying inspired?

A: I just want to say, we’re all still growing and learning. Don’t worry about what anybody else thinks. Just keep doing your own thing and eventually your hard work/time you put into it will pay off somehow. Be open to constructive criticism, focus on developing your own sound. Look for more influences whether if it is more music, painting, or writing. Stay consistent, and interact with your supporters. Building that relationship is so important. I personally think it’s the best part. Lastly, as corny it might sound, just always try to have fun with it too. If it makes you happy, then why not keep going for it? You might as well make the most of it.

Q:  Is there anything you would like to tell your supporters?
A: To all my long time supporters, thank you so much for sticking around since Sucky Notes. You all believe in me when I don’t, and I appreciate every single one of you! Your support will never go unnoticed, it’s what keeps me going. To all my current supporters, thank you for checking me out, I’m glad you enjoy my music, it gives me some peace in my mind. I feel like I’m letting out a huge part of myself when I release my music, so it’s cool that people want to experience that with me too.

Be sure to listen to Celestia’s newest song “Malevolent” buy clicking here,